By now most of us are accustomed to the way mobile carriers price their data plans. We typically drop $20 to $50 each month on a few gigabytes. If we use more than our monthly data allotment we’re hit with inflated overage fees, but if we don’t use all of our data it expires. The next month the cycle starts all over again, whether we had remaining data from last month or not.

But why does data expire at the end of the month? It certainly can’t spoil like the gallon of milk in your fridge. The gigabyte you bought on March 1st is just as usable on April 1st. So why do most mobile carriers expire your data or offer complicated rollover plans rather than just doing away with data expiration?

This week Questions to Carriers seeks to determine why data expires and which rollover options, if any, actually help consumers save.

When you think about things that expire you usually think of perishable foods, not technology. Maybe coupons or credit card reward points come to mind. But expiration dates on discounts or freebies are logical. Expiring data each month doesn’t make much sense. It’s not going moldy. So why do mobile carriers do it?

For the same reason mobile carriers bundle their services together, they expire your cellular data. In the mobile industry it’s called “breakage”. The term describes any service that a customer pays for but doesn’t use. So when you buy 5GB of data but only use 3GB in a month, the unused 2GB you paid for is “breakage”.

Mobile carriers carefully design data plans to maximize the amount of expiry breakage that occurs. They offer plans that are right on the cusp of an average subscriber’s monthly usage in order to push you to buy more data than you really need.

In recent studies from Cisco and Mobidia/Ovum (pdf), researchers found the average mobile device user consumes about 2GB of data per month. Both T-Mobile and AT&T just so happen to offer 2GB data plans. But the next tier jumps up to 6GB and 5GB respectively. If you only want 2.5GB each month, too bad. You’ll have to buy at least 5GB or risk overages. 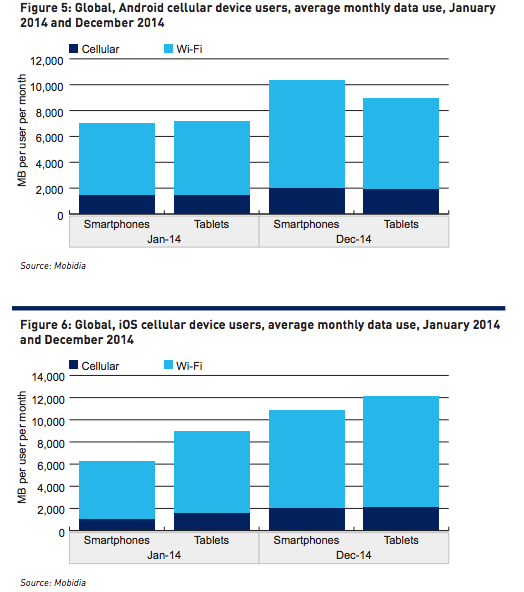 To make matters worse and to further push you towards bigger plans, carriers don’t prorate data overages. It doesn’t matter how much data you consume above your plan’s cap. You are charged for a full gigabyte of data when you go over by even the smallest amount.

For example, AT&T currently offers a 2GB plan for $30 per month. They charge $15 per GB for overages. So your monthly bill will be $45 if you go over your 2GB data allotment by any fraction of a gigabyte. AT&T’s next data tier is a 5GB plan which costs $50 per month. And that bigger plan is perfectly priced to convince you to pay $5 more for overage “peace of mind”.

But threat of overage fees isn’t the only way mobile carriers sway you to buy more data than you need. A few mobile carriers have started to offer something called “rollover” data too. Currently AT&T, T-Mobile and some Sprint prepaid customers have access to this “perk”, which is a deceptive attempt to make customers feel like their data doesn’t really expire. T-Mobile and AT&T in particular have spent a lot of marketing dollars to convince you not to worry about leftover data at the end of each month because you could use it at a later date.

For AT&T subscribers, any unused data from your plan is available to use in the next month, then it expires. While T-Mobile allows customers to “data stash” up to 20GB of unused data for 12 months. Both seem like fair reasons to get a bigger plan, until you realize that you will likely never touch the data they’re so generously stockpiling for you. That’s because each month you have to get through your current month’s data allotment first.

If you can’t use your older data first, then rollover data isn’t all that appealing. It doesn’t matter how much data you save each month if you never go through your monthly data allotment. You’re still being forced to pay for more than you need. If you veer towards more than the 2GB average usage, you were probably already forced into a bigger data plan. So don’t expect rollover data to ever kick in, unless you drastically change your data usage habits. 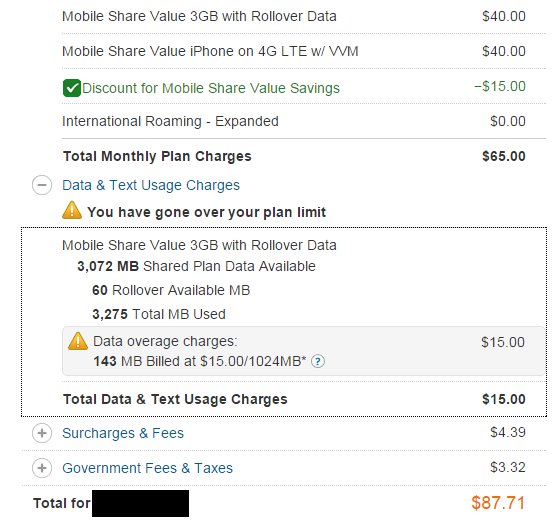 And what about people who can curb their data consumption to less than 2GB, so they can avoid buying the bigger plans? Well, rollover data doesn’t look so great for them either. The AT&T bill above is for a rollover customer that typically comes close to using their whole data allotment each month, so they don’t ever roll over much data. This month they went slightly over their 3GB plan’s data cap, but their small amount of rollover data wasn’t enough of a buffer to actually help. They were still hit with costly non-prorated overage charges.

So while mobile carriers do a great job at marketing their rollover data options, it’s actually only helpful if your data usage is highly variable. Or as the Consumerist puts it,

...rollover data is only useful if your data use fluctuates wildly from month to month.

For the average user, that’s simply not the case. Rollover data is not a substitute for data without expiration.

As consumers we should get what we pay for, and that’s data that doesn’t perish. We don’t accept the “use it or lose it” model for other utilities like gasoline or electricity. Why do we accept it for mobile data?

At Charge our mission is to help usher in a future where mobile connectivity is simpler and priced more transparently. We want to make it easy for customers to pay only for the services they need. We made a lot of progress towards that goal with our LTE mobile data-only

When we started Charge, we wanted to help usher in a future where mobile connectivity was simpler and priced more transparently. We wanted to make it easy for customers to pay only for the mobile services they need. So we launched our LTE data-only plan for all Sprint-compatible devices in

For a long time now we've had some customers with iPhones receive a SIM and activate it from their Charge account, only to report some very strange behavior when they pop the SIM into their device. The status bar will show "Sprint LTE" for somewhere between two and